Hamad Butt was born in Lahore, Pakistan, 1962 and moved with his family to Britain in 1964. He went to school in London, apart from a two-year stretch at the Sacred Heart School in Lahore. Hamad was particularly close to his  mother, Jamila Butt and father Masood Butt and grew up in Ilford, Essex prior to  attending University.  As a young man Butt develop parallel interests in art and science, taking A levels in biology, chemistry, mathematics and art.

Between 1980 and 1987 Butt attended a number of art schools, including Central St Martin’s College of Art and Design. He made paintings, sculptures, prints and installations. In 1987 Butt began a degree course at Goldsmith’s School of Art, graduating in 1990 with one of the highest grades ever achieved by a student there.

At Goldsmiths’ Butt concentrated on making installations. ‘Transmission’ was exhibited in London in 1990 and ‘Familiars’, which was commissioned by the John Hansard Gallery, Southampton, was first shown in 1992. This three-part work makes use of industrial and alchemical imagery, combining Butt’s interest in science with his desire to make art.

In 1991 Butt exhibited a group of his paintings, largely abstract work and self-portraits. During the last year of his life he become interested in working with film and sound, but became too ill to follow this through. Hamad Butt died in London in September 1994. 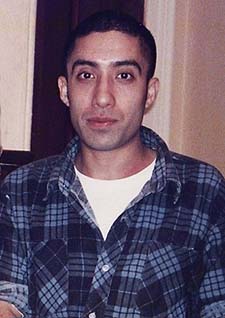